Cedarburg, WI TRAIN SHOW GOES GLOBAL
The breadth of the model trains being exhibited at the spring show of the METRO Model Railroad Club has gone international. The Club has invited the Milwaukee chapter of the European Train Enthusiasts (ETE) to exhibit their models of European trains, locomotives and cars that differ significantly in appearance from American trains. Many of these models are made by Marklin, a brand very popular in Europe and with many aficionados in the States. Their layout also demonstrates how trains can be controlled by a cell phone or tablet.

The show, scheduled for March 8th at Circle B Recreation in Cedarburg, will feature all the popular scales of model railroading. METRO’s own national award winning portable layout will be the exemplar of HO scale. This layout is fully scenicked and highly detailed, with many animations and humorous scenes. Its larger cousin O scale, popularized by the Lionel brand, will be represented with equipment brought by Joe Rantanen of the Kettle Moraine Ballast Scorchers, who will be exhibiting a variety of newer Lionel O Scale Trains. 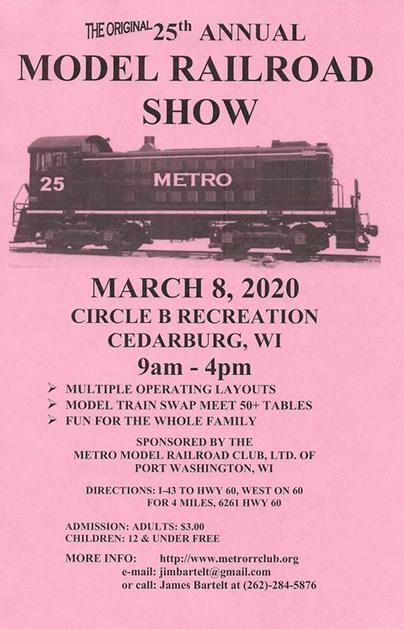